The Bank for International Settlements (BIS), an organization whose membership consists of the central banks of 60 nations. Their goal is to “fosters international monetary and financial cooperation and serve as a bank for central banks”.

The 23rd November, the BIS committee on payments and market infrastructures (CPMI) released a report titled: Digital Currencies. The report describes a range of issues that affect digital currencies based on distributed ledgers. While some of these issues might be detrimental for the growth of blockchain technology, the report seemed positive on the overall potential of blockchain technology.

Quoting the report: “Wider use of distributed ledgers by new entrants or incumbents could have implications extending beyond payments, including their possible adoption by some financial market infrastructures (FMIs), and more broadly by other networks in the financial system and the economy as a whole […] Central banks could consider – as a potential policy response to these developments– investigating the potential uses of distributed ledgers in payment systems or other types of FMIs”

The role of regulation and regulatory frameworks

It is not surprising that the report spend a considerable amount of time detailing the role of regulation. Both the legal and regulatory risks present in digital currencies and their payment mechanisms are yet to be fully understood, but the report made an effort to see both the upsides and downsides of introducing new legislations aimed at the up and coming technology.

“Some developers and users of digital currencies have opposed such developments, seeing them as inconsistent with the emergence of new technologies that are less regulated than the traditional payments industry.

Others have seen lack of regulation as an impediment to the growth of public confidence in digital currencies, as some actors may refrain from investing in this new technology due to legal uncertainty and/or lack of protection for users.”

While no concluding advice was given in the report, they provided a broad classification of the main types of regulatory action that each country could pursue in the following table, and noted that the global nature of digital currencies might require “a coordinated approach at a global level may be important for regulation to be fully effective. . However, this does not preclude certain actions at the national level, for which at least five general categories of actions can be identified.” 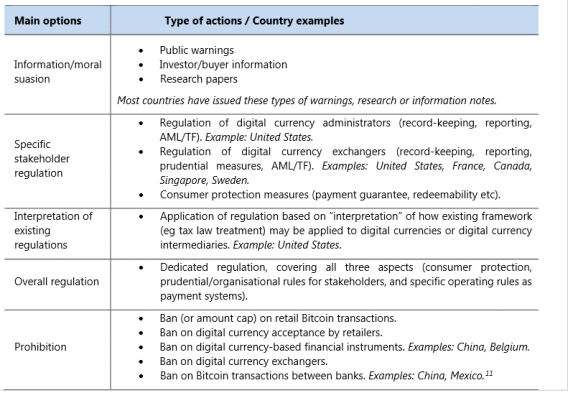 Towards a technological framework

Up until this point, the development of blockchain technology has been mostly performed by tech firms with little to no financial experience. For the most part, banks have tended not to engage directly with developers and users of digital currencies such as Bitcoin, Litecoin, and others. One of the reasons for this has been due to perceptions of risk and uncertainty over legal or compliance issues, but the major reason is most likely the conservative and slow-moving nature of most financial institutions.

This year however, has seen massive rise of interest not only by several financial institutions (see chapter 4 and 5 of my report), but also from the regulatory bodies of both the U.S as well as EU. The European Securities and Markets Authority (ESMA) released a Call for Evidence in the use of blockchain technology earlier this year.

And, just to show how advanced ESMA’s thinking has progressed, this chart proved especially interesting, as it shows a potential framework for using blockchain technologies for European markets. Thefinanser.co.uk made an excellent post on the ESMA and their blockchain findings, which can be found here

To try to conclude this already way too long post, it is interesting to see that the interest in blockchain technology is growing. Where it used to be the interest of a select few techno-enthusiasts, it has now gained not only the interest of the world largest banks, but also some of the highest regulatory bodies of finance. It is not without reason that 2015 has been called the “year of the blockchain”. Going forward, I feel that it will be important to find the right regulatory balance, as that might spell the difference between stifling and facilitating innovation in the field. Inititiatives such as this made by the Financial Conduct Authority (FCA) seems to be a great idea. The FCA promises to provide a testing ground which will allow fintech businesses to test and develop innovative products, in a real-world setting free of potentially-stifling regulatory requirements.

One thought on “The road towards technological and regulatory frameworks emerge”