The most eyecatching story coming out of the Ethereum DEVCON1 conference held in November, was definitely the announcement that Microsoft and ConsenSys are partnering to offer Ethereum Blockchain as a Service (EBaaS) on Microsoft Azure. This partnership will allow enterprise clients and developers to have a single click cloud based blockchain developer environment, where they develop distributed apps (DApps) without worrying about the underlying infrastructure. The initial offering contains two tools that allow for rapid development of SmartContract based applications: Ether.Camp – An integrated developer environment, and BlockApps – a private, semi-private Ethereum blockchain environment, can deploy into the public Ethereum environment. 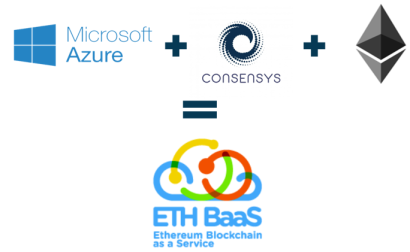 This means that Blockchain-as-a-Service or Baas, a term coined by William Mougayar earlier this year, is now a thing. Important to realize is that Ethereum nodes running on cloud providers like Azure can be used for connecting to both the public Ethereum blockchain or creating a private, permissioned blockchain.

The challenges that needs to be solved

According to Christian Lundkvist of Consensys we should regard the gap between “trustless” and “trusted” as a continuum. There can be DApps that are fully trustless, where neither the creator nor its users need to trust each other in any way. There will also be DApps where a strong degree of trust is available, and that will change how that DApp operate compared to the trustless DApp.

The most important challenge for DApps, will most likely be how privacy is handled. Data and logic on a public blockchain are, by definition, public. Strategies like selective disclosure of anonymous data and zero-knowledge proofs are the most promising approaches to achieve desired levels of privacy.

Another important challenge that needs to be solved is how to deal with identity and reputation in a fully public blockchain. If a business run on the Ethereum platform is governed by a DApp, how will the owner know their customers? Or is it even necessary to “know” them? This question was raised at a panel debate during the DEVCON1 conference. The panel agreed that reputation systems are needed, and that  a  person’s reputation needs to be context-sensitive. Today’s system of rating a person, system or otherwise user by a single number is not enough. This calls for a new way of thinking in reputation systems.

It’s evident that Ethereum as a development platform is quickly maturing and getting closer to being ready for mainstream adoption. The phase in which it’s very hard to get even a basic example running is over. With the recent partnership with Microsoft and Consensys,hopefully developers will be able to play, learn, and fail fast at a low cost in a ready-made dev/test/production environment.

If you want to watch the full announcement at DEVCON1, you can see it on Youtube

One thought on “Ethereum, the blockchain ecosystem of the future?”