Blockchain contains what everyone in data management, from data scientist to chief data officer (CDO), wants: Information that comes with complete provenance. That is data showing who did what, when and with full history from day one. Verified by all parties participating in the network, transparent, with complete reconciliation, and secured by the latest in cryptography.

Blockchains have their origins in cryptocurrency platforms, in particular bitcoin, where they represent historical records of verifiable monetary stake. They were designed in the first place to solve the double spending problem, that is, to establish consensus in a decentralized network over who owns what and what has already been spent.

Blockchains are authenticated records of the history of a network’s activity distributed among the users of the blockchain all around the globe. A blockchain enables secure storage of arbitrary information – in some cases, a token balance; in other systems more complex information – within the network simply by securing a set of private keys.

After some years of evolution, blockchains are now capable of storing arbitrary data and establishing permissions to modify that data through self-administering and self-executing scripts which are performed by a distributed virtual machine. These scripts are known as smart contracts, and they allow platform operators to define complex and fully customisable rules which govern the blockchain’s interaction with its users.

These rules are fundamentally different from the constraints that appear in traditional databases, because they relate to the legitimacy of transformations rather than the state of the database at a particular point in time. Every transaction is checked against these rules by every node in the network, and those that fail are rejected and not relayed on.

Asset ledgers contain a simple example of this type of rule, to prevent transactions creating assets out of thin air. The rule states that the total quantity of each asset in the ledger must be the same before and after every transaction.

In other words, the blockchain rules answer the question: Was that a valid transaction? This is fundamentally different from the classical database question: is the database is valid at this single point in time?

Blockchains are neat because they take the old concept of commits, transaction logs, and replication in database architecture and replace it with an integrated system of authenticated state transitions.

That’s valuable for a plethora of different of things, such as transparency, auditing, accountability and so on. Blockchains make auditing and verification easy and for a next generation smart government and auditable economy, and that is going to have a significant impact.

The death of spreadsheets?

“Ah… the spreadsheet. Want any number in particular? No problem. Couple of clicks and the unit, area, region or group meets its target or stays within the guidelines. Yes in three or six months’ time, the numbers at the top level may not balance with the auditors, but hey ho.

Spreadsheets are prolific throughout financial services. There are even systems designed to take data and show it as a look a like spreadsheet. Well the staff is so familiar with spreadsheets they know what they like and few like change. Not only are the figures changed but usually without a record of who made the changes. Unattributed changes cannot happen with Blockchain.” John Bertrand – SAP

Every entry in a blockchain is recorded by time and who made the entry. This information is distributed to the people in the chain, includes authorised regulators, every time a change is made. Each change is completely transparency and verified by many third parties. Blockchain numbers are true and transparent.

You might have heard the expression of ‘garbage in, garbage out’ when talking about the importance of data quality and validity. The data available across the many silos of a financial institution is a mixed bag in terms of quality. Often, because of legacy systems and the incongruity of new data elements, information is in many different places across the enterprise. Given 64% of banks have two or more data warehouses, with 18% having 11 plus warehouses (Banking Technology, September 2015) and many specialist, standalone databases finding the right data at the right time is complex. With Blockchain it is simple, there is only one source.

Blockchains as a new database in finance 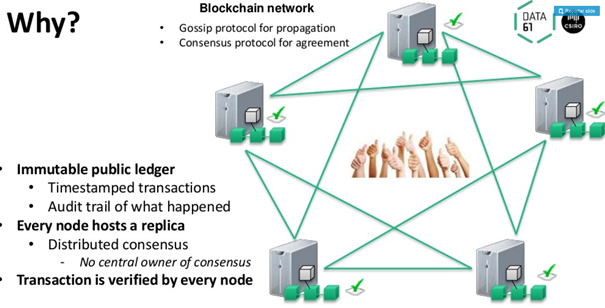 Blockchain clients allow for the development of distributed systems which do not rely on what traditional databases call ‘master-slave’ clusters. This drastically increases the resiliency of blockchain networks as a data management solution.

In a blockchain network, there is not even a notion of master-slave relationships between the nodes in the cluster. Instead, blockchain networks utilize the idea of peer nodes and consensus models to resolve the current world state of the data.

In addition, blockchain networks allow for transactional certainty. Traditional databases store the current world state of the data, and if they are programmed to do so, have additional entries covering previous transactions within the data store. In addition, traditional databases are also able to maintain logs of the history of the interactions.

Blockchain networks are designed differently in that the logs of the transactions with the data set are used to formulate the world state of the data. The use of cryptographic authentication of time-stamped blocks of transactions allows the entire network the benefit of certainty of the entire transactional history.

Basically, it all boils down to this: in a blockchain network if we know the state of the data at the genesis of the blockchain and we accept the state right now, we can be assured that there is one and only one way in which to get from the original state to the current state.

Both incumbents and fintech startups are working on several different reference data projects. SWIFT, for example, seems to have gotten tired of the talk that their business might be disrupted by a group of blockchain startups and have taken steps to integrate the technology in their existing network. Through the
Global Payments Innovation Initiative SWIFT is working on some proof-of-concept projects involving blockchains, which will be focysing on:

– ISO 20022, applying SWIFT standards expertise and the ISO 20022 data interchange standard to a distributed ledger, using a fixed-income security as an example.

Similarly, fintech company Eris are working on blockchain Legal Entity Identity (LEIs) to separate out the information needed on LEIs to meet legal compliance. Another interesting initiative is the collaboration between Philips Healthcare and blockchain startup Gem who are: “looking at how they can use blockchains in a number of ways: to transport medical records from provider to provider and build those sorts of networks; as well as how they can use health data generally to incentivise people to be healthier, to build reward systems around healthy behaviour using IoT devices, all sorts of stuff.” 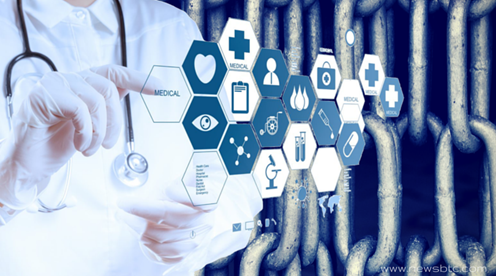 This is just a small selection of some of the projects out there. Only time will tell which will prove successful or not. There will be some time before a best-practice in blockchain data management will segment, but the future looks bright.